Chelsea Close in On Hulk Signing

In spite of being yet to make an announcement on who will be their manager next season, Champions League winners Chelsea are already making waves in the transfer market as they attempt to lure Brazilian power forward Hulk from FC Porto. The powers that be within the Blues hierarchy see the 25 year old as an ideal replacement for the talismanic figure of Didier Drogba - who at 34 has announced that he will now leave Chelsea following the expiration of his contract. 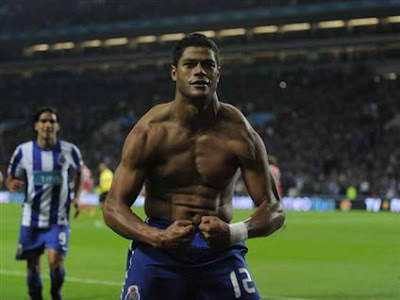 Hulk has notched up an impressive 21 goals for Porto this season and has a proven pedigree in European competition over the last few years – but as such will not come as a cheap option for Chelsea . With a reported release clause of 100 million Euros in place within the player’s contract, even the Blues billionaire owner Roman Abramovich would have to dig deep into his pockets to prise away Hulk from Porto. However, reports from Portugal confirm that the player is keen on a move to the Premier League – and with Champions League football now assured Chelsea would prove an attractive prospect.
Posted by Andy Peters at 03:06 No comments:

Records once again tumbled in Barcelona last night as one of the world's all time great players continued to expand his ever growing legacy in Spanish football. A quadruple from Lionel Messi against city rivals Espanyol saw the Argentine become the first ever player to reach 50 goals in La Liga, as the home side swept aside their local rivals in a 4 - 0 win.

With a string of memorable performances and goals for the Spanish giants, Messi has achieved this incredible feat in just 36 league games, and has now comfortably eclipsed the previous record set by Real Madrid's Christiano Ronaldo - who had found the net on 43 occasions in the Spanish League last season.

Messi took his own personal goal tally for the season to an outrageous 72 in all competitions, and had already set a number of new records during his time at the Neu Camp - including becoming the first player to score 5 goals in a Champions League match as Barcelona crushed Bayer Leverkusen earlier this season.
Posted by Andy Peters at 02:51 No comments:

As Roberto Di Matteo prepares his Chelsea squad for this afternoon's FA cup final clash against Premier League rivals Liverpool at Wembley, even the most experienced pros amongst the West Londoner's ranks - such as England stars Ashley Cole, Frank Lampard and John Terry - could surely not have expected to see the club's fortunes turn around so sharply under the guise of the Italian. Twice an FA cup winner himself with the club, the interim boss who took over the reins from the sacked Andre Villas-Boas has overseen a dramatic transformation in not only the attitude and application of his players, but more crucially for owner Roman Abramovich, a significant improvement in results for the blues, as he looks to win the first of 2 huge cup finals for Chelsea in the coming weeks.

Something that was seemingly lacking for Chelsea under the tenure of the ousted AVB was a sense of togetherness and accord between players and manager - something that Chelsea captain John Terry has been keen to emphasise has returned to the squad under Di Matteo's leadership - and now the true blue wants to win the first of 2 trophies in the closing weeks of the season to try to help his boss gain the backing of the club's  Russian owner so he can take up the job on a permanent basic with a long term contract. Terry was earlier quoted as saying:


"To win [the cup] will put himself in a very good position...If we can do it with the added bonus that Robbie can get the job at the end, that'd be great."

Publically Di Matteo himself has been loath to talk up his own chances of taking up the managerial position at Stamford Bridge on a permanent basis, instead calmly portraying a young manager who is happy to take each game at a time. However, if a win in the FA cup could be followed up by finally fulfilling Abramovich's dream of securing victory in the Champions League then their could surely be no other possible contender to match the Italian's claims for one of English football's top jobs.
Posted by Andy Peters at 05:03 No comments: